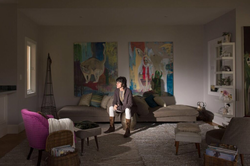 photography by Emma Anoushka Bartlett
​It has become crucial for me to have an artistic & sustainable practice that works
with and for the benefit of the environment and communities
ARTIST STATEMENT
Carolyns' practice focuses on contemporary society and ethics regarding single-use wastage in the packaging industry.
Her body of work critically questions the relationship between humans and the environment in repurposing found material such as single-use plastics. Her work has examined concepts of consumerism waste and environmental degradation.
Through her artist residencies and inspired by the freedom instilled in artists from the Arte Povera and Art Brut movements from around the world her creations of costumes and large-scale installations incorporate found materials often referencing and encouraging sustainability mindedness and action.
He artwork has been exhibited in art prizes as a finalist and festivals in Australia and internationally.
In 2017 she was invited to create an installation for the opening of the French film festival and was included in the Bastille Day festival.
In 2018 following an artist residency at the Australian Tapestry Workshop, her Op-shop up-cycled fashion collection was the inspiration behind the RENEW Runway with Yarra Youth Services for the Virgin Australia Melbourne Fashion Festival.
In 2019, for ClimArte (Art + Climate=Change) , she curated the exhibition BLEACHED at the Alliance Française de Melbourne. Within this exhibition she collaborated with Gabrielle Leah New on a project to bring awareness to the environmental impact caused by coral bleaching of our reefs.
This year during their collaboration at the Yarra Sculpture Gallery Winter artist residency, Carolyn and Gabrielle developed a video and installation based project, reflecting on climate change by bringing together issues on last summer bushfires and the fossil fuel industry

BIO
Paris, France born, artist Carolyn Cardinet lives and works in Australia. She received an MFA in 2012 from Rmit, Melbourne, studied Honours at Monash in 2005 and was a recipient of a BFA in 2004 from the Victorian College of the Arts, Melbourne University.
Carolyn studied painting but found the need to break away from the traditional canvas. This lead her practice to assemblages, costumes, video, sculpture,
site-specific installations and some collaborations to explores the sensorial quality of the discards in nature.
Passionate about the alarming rate at which our environment is changing, Carolyn creates new forms out of the abandoned.
Her sculptural pieces reflects upon the affect and effect plastic manufacturing and consumerism have on our ecosystem .

Carolyn is an art facilitator and a guest artist spreading waste awareness's through informative talks, presentations and art making in schools.
As a Climate Leader and an Art & Sustainability educator, Carolyn delivers her programs in schools & for students of all ages.

'Carolyn's large site specific installation are a catalyst for action!'